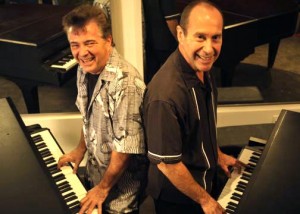 The Dueling Pianos have been based out of the Philly area since March of 1990, when they started at Market Street Live in Center City Phila. Since that time they have performed at nightclubs, colleges, parties and corporate events throughout the east coast, from Boston to North Carolina, out to Anaheim Ca., and also down to Biloxi, Ms.

The Dueling Pianos features Tony T. (Anthony Decarolis), Wildman Joe (Joe Marchetti), performing energetic sing along classics for all ages. Their entertaining style of inter-acting with the audience has everyone singing, clapping and partying along. Come out and join the fun, a good time will be had by all.